It is over 90°F outside for the 3rd day in a row. You’d think that because honeybees keep their hive at an average of 95°F throughout the year, that this temperature would be no big deal.

Imagine having a small and nicely air-conditioned house on a day like today. You decide to invite 100 people over for a party. The house no longer feels pleasant- it’s overcrowded, stuffy, and you can tell that the central air is struggling to maintain the temperature. What would you do? While I’d have no shame in telling everyone to go home (and admit this was a terrible idea), maybe you’d offer up hanging out outside.

For bees, this is where bearding comes in. At this time of the year, the honeybees may be heading toward their peak in population (up to 80,000 bees in one hive!) In order to regulate the heat on the inside and keep the queen at her preferred temperature, many of the bees form a beard on the front of the hive.

Speaking of hive population, the amount of bees bearding on each hive can give an idea of how well it is doing. This hive, one of my 2 winter survivors, is looking weak considering there is no beard.

To compare, this is our second winter survivor. As you can see, they have an almost full beard. There are more boxes on this colony because they are doing very well with producing honey. Surprisingly, there has been no sign of swarming. The hive on the right is currently empty. 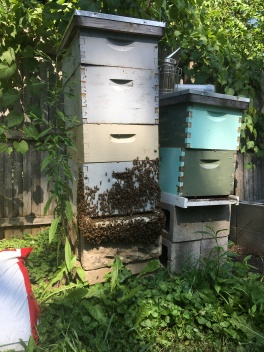 Our third hive, the Carniolans that were purchased as package bees in the spring, have a cute little beard that is growing every hour. These girls are also doing very well.

Our last hive, a nuc we purchased in May, has a much bigger beard than I would have predicted. When I checked them last week, they had 3 capped emergency queen cells and no living queen. The bottom box had frames that were mostly filled up, but the top frames were completely empty. 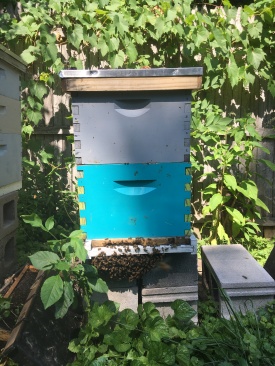 With this crazy heat, this is another perfect opportunity to remind people to provide water for the bees. They are thirsty too!

Interesting fact: Some bees are given the job of collecting water to bring back for evaporative cooling- this includes bringing water, then fanning their wings to move the cooler air through the hive.